“What Else Do They Do?”- Steve Gomez

When you ask someone what a person who works for the police department does, you’ll likely get a response of “they arrest people” or “they write tickets.”  We can’t argue with that.  But, with 180 employees within the Grand Junction Police Department, both civilian and sworn, there are many folks here who do amazing things for our community and our police department- beyond just making arrests or issuing tickets.  We want you to know about some of these people.  We hope you’ll enjoy this insight into some of the work being done as we answer “What Else Do They Do?” 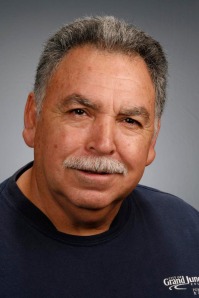 “One of the main things in life is to help each other.” -Steve Gomez

People don’t often think about the amount of personnel that it takes to keep a police station running efficiently on all cylinders.  Although he’s officially assigned to the Facilities Department within the City of Grand Junction, we here at the Police Department feel Steve Gomez is one of us because of all of the hard work he puts into our building as the custodian.  This particular “What else do they do?”  highlights the random acts of kindness Steve has made a frequent occurrence within the walls of the Department, from making sure people make it safely to their vehicles to buying dinner for hungry children while an incident is being worked.

“Maybe they’ll see this act and pass it on,” says Gomez.

Numerous employees at the GJPD can share stories about Steve.  One particular occasion where these events stood out was when an officer was dealing with an incident while the witnesses, victims, and their families patiently waited in the police department lobby.  There were several young children with them and the evening was dragging on.  The children were not only tired, but they were hungry too.  Without being asked, Gomez took it upon himself to buy food for the hungry families.

“(The kids) see these things and they never forget it,” explains Gomez, referring to someone doing something nice for them.

This isn’t the first time that Gomez has taken money from his own pocket to pay for meals for people waiting in the lobby.

When asked about such random acts of kindness like these, Gomez just smiles shyly and says, “I don’t like talking about myself.”  He doesn’t do these things in search of recognition, making his true kindness and willingness to help others truly commendable.  Here are some other highlights of Steve’s career:

Other things Steve has said:

“One of the main things in life is to help each other.”

“I thought it would be different working here.  People would say ‘That’s the police department!’ But everyone here is so nice.”

“It’s sad to see little kids who are hungry.”

This entry was posted in Uncategorized.

I read the blog about Steve Gomez, and I am truly glad that there is an article about him. Steve is a wonderful person and he always has a great attitude and helps everyone out!

Way to go Dad!! Were all so proud of you, I’m especially lucky your my dad, but I definitely know I get my generosity and kindness from you, We love you dad and your an angel in my eyes. Lizzy Gomez-Martinez

This is the official blog of the Grand Junction Police Department.

The Grand Junction Police Department is committed to providing you information and updates, straight from the source.

This blog is used to keep you informed on interesting cases, important safety information, community events, and general news involving this department.

Please make sure to enter your email address and follow this blog so you can receive instant updates anytime we post something new.

We strive to be as transparent as possible so we appreciate your desire to participate in two-way communication with us.

Comments that relate to the topic at hand, whether you agree or disagree, are encouraged and appreciated.

If your comments are appropriate and relevant, they will remain on our page. If you post a comment that appears to be based on misinformation or incomplete information, we will respond as quickly as possible to answer questions you may have or provide more data, details or specifics.

We will not tolerate language that is abusive toward the Grand Junction Police Department or the City of Grand Junction, its employees, or toward anyone who comments on our page. If your posts are offensive, denigrating, insulting or unrelated to the topic, they will be deleted.

Opinions expressed by visitors to this blog do not reflect the opinions of the Grand Junction Police Department.

More information about the Grand Junction Police Department can also be found on our website: www.gjcity.org/GJPD.

This blog is updated and monitored by the GJPD Public Information Coordinator, Callie Berkson.